New figures released by FairFuel UK reveal the extent to which UK drivers are being charged significantly more for fuel than comparable markets overseas, with wholesalers experiencing months of wholesale price cuts on petrol and diesel that are not being passed onto UK consumers.

The new table* reveals that major developed markets average 25p cheaper than the UK for petrol and 35p per litre cheaper for diesel.

Campaigners believe that the haulage industry, logistics and distribution businesses who rely on diesel continue to be targeted as easy cash cows, meanwhile an average UK family car here in ‘dear old blighty’ is paying up to £16 more for a tank of fuel than families in other developed markets. 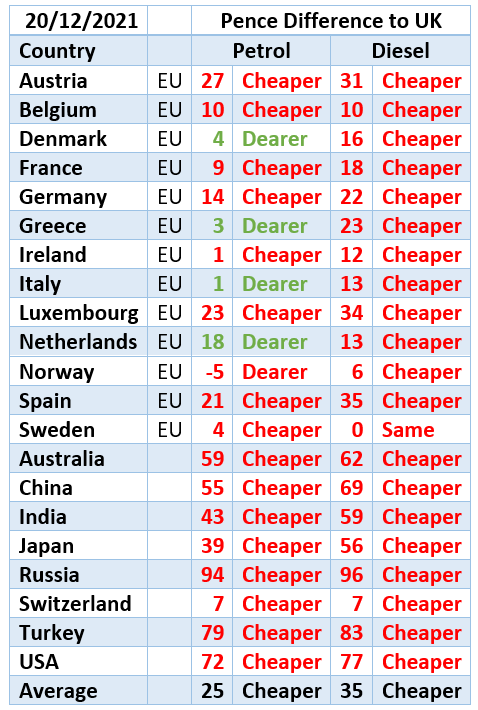 A spokesman for Fairfuel UK said:

“Even with the one of the highest fuel taxes in the world, pump prices here in the UK should be at least 10p per litre cheaper than they currently are. (the RAC supports FairFuelUK’s analysis on this figure).

“No matter what happens the Fuel Duty Tax take will remain at 57.95p per litre, so, the Government will not lose out on fuel tax revenue. Drivers and consumers would spend more too, so VAT and corporation tax would increase as a consequence.

“FairFuelUK repeats it’s call for the Competition and Markets Authority to investigate the continuing unchecked profiteering in the fuel supply chain.  If prices at the pumps were honest, transparent and open to scrutiny, inflation could fall by as much as 1%.”

“Boris and Rishi’s head in the sand economic management of the fuel supply chain’s unchecked opportunistic profiteering, beggars belief. The huge amount of VAT being generated by the eye watering pump prices, is great for the Treasury, but, these greedy rip off prices are crippling low income families, small businesses and are accelerating the rise in inflation.

“It is in the Prime Minister and Chancellor’s hands to order a CMA enquiry, introduce PumpWatch, stimulate consumer spending and help disillusioned voters. Why are they ignoring this popular fiscal cry from the majority of the public and businesses?”